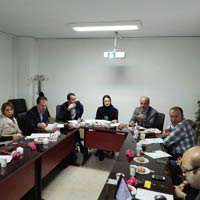 According to the public relations of the National Association of Plastic Industries of Iran (INPIA), the 15th and last meeting of the Education Commission of the National Association of Plastic Industries of Iran was held this morning, March 31, at the Iranian Polymer Research Institute. In this meeting, the members of the three working groups were appointed. According to this report, the news was before the order of the first paragraph of the meeting, and after that, the issue of finalizing the necessary frameworks to attract sponsors was examined. Alireza Tork, emphasizing the start of activities of the three pilot working groups designated for the education transformation plan in the plastics industry, said: “It is necessary for the working groups to extract several training courses with their technical and specialized studies.” It was also decided that the issue of attracting sponsors for the working groups, if the plan is approved by the board of the National Plastics Association, be informed in due time so that the people of the industry can apply for sponsorship if they wish. In this regard, Turk pointed to two types of sponsors and explained: The first type is educational institutions that benefit from their sponsorship in two ways, the first is the aspect of branding and advertising and the second is participation in holding training courses extracted by the working group. . He mentioned other non-educational companies as the second type, for which the issue of advertising and branding is more important. In this regard, it was also approved that the sponsors of the working groups benefit from 10% of the profit from holding training courses by the facilitator for two years, and this clause should be mentioned in the contract with the training course organizer. Finalizing the list of experts proposed by the working groups was another issue that was raised at the commission meeting, which was ultimately for the upvc working group; Mr. Tanz and Mr. Zandinejad, Film Working Group; Messrs. Habibollahi and Milad Soltani and Injection Working Group; Zeinali, Mirblok, Haddadi, Pirkamarani, Mohammadipour and a representative of the mold makers were appointed. After appointing the members of the working groups, it was established to hold its first meeting until the end of April next year, to coordinate the holding of a Dikum training course with the presence of the members of all three working groups. The meeting continued with a review of the proposed jobs and their final determination and presentation of opportunities. In this section, Karbasizadeh explained about using the Dikom model in working groups. For the proposed jobs, 12 jobs were selected at four levels; At the QC level; Jobs QC Manager, Laboratory Manager, QC Expert, Laboratory Expert and QC Inspector. At the production level; Jobs as Production Manager, Production Supervisor and Production Operator. At the level of templates and tools; Jobs: Molding Manager – Machining, Machining Technician and Machining Operator at R&D level; Materials, product and process jobs and R&D expert. According to this report, the draft memorandum of understanding with the Polymer Research Institute was reviewed in the continuation of the meeting. The presentation of a report on the past approvals of the Education Commission in 1994 was the last item on the agenda of the commission. The members present at this meeting were; Alireza Tork (Deputy Chairman of the Education Commission), Javad Hobe Fekr (Alborz Plastic), Neda Ahmadi (Kimiaran), Nima Karbasizadeh (Society of Mold Makers), Soraya Ezzati (Society of Mold Makers), Farnaz Sadeghzadeh (Andisheh Bartar Miran), Hamed Azizi (Polymer Research Institute), Ali Salimi (Head of Industry Relations of the Research Institute), Shoaib Hassani (Plastic Worker) and Farzaneh Alirezaei (Secretary of the Education Commission of the National Association).