How did McDonald achieve global success?

Founded in Southern California by two brothers, Dick and Mac McDonald, McDonald’s has its roots in a street restaurant, and now has a network of more than 35,000 branches in more than 110 countries. Has become. How did this chain grow from a street restaurant to a large company? This is not a question that […] 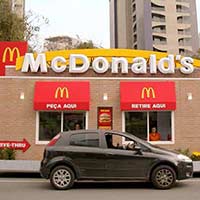 Founded in Southern California by two brothers, Dick and Mac McDonald, McDonald’s has its roots in a street restaurant, and now has a network of more than 35,000 branches in more than 110 countries. Has become. How did this chain grow from a street restaurant to a large company? This is not a question that can be answered briefly, because McDonald’s has performed tremendously in various areas. With this in mind, this article focuses on three factors that contribute to McDonald’s success; Stability, innovation and flexibility. So how do you go about discovering McDonald’s success factors? It doesn’t matter if you go to McDonald’s, California or Connecticut, be it in the US or Australia, wherever you are. This reflects Ray Kroc’s view of McDonald’s from the earliest days. Crack was an Illinois salesman who moved to San Bernardino, California in 1954 to make a deal. He received a very large order for the milkshake mixer he was selling. When he arrived in Southern California, he was surprised by what he saw; A restaurant that sold food to multiple customers that seemed to be very satisfied with its purchase. Sensing a business opportunity, he offered the McDonald brothers to share their restaurant franchise with him, and the offer was accepted. Crack established the first McDonald’s branch in 1955 in Illinois. Crack’s motto was: “Quality, service, cleanliness and value.” His belief in this slogan was so strong that in 1961 he started a school called Hamburger University, the curriculum of which was based on these four concepts and the lessons he had learned from the first years of his administration. Of course, stability is at the heart of any communal system, and since its reopening more than 50 years ago, Hamburger University has systematically taught prospective partners how a McDonald’s restaurant is run the way Ray Crack imagines. Customers know what to expect and can count on this awareness when choosing the restaurant of their choice. These efforts to replicate and streamline the process are not only the foundation of McDonald’s success in terms of customer expectations, but also help McDonald stay at the top in a culture that generally expects high-speed production. McDonald’s Troy Drive in Sao Paulo, Brazil At first, the characteristics of stability and innovation seem to contradict each other. But in fact, they work together to help McDonald’s continued growth. Adherence to the core components of your business does not mean that the products you sell or even the way they are delivered should always remain the same. With a strong foundation and advanced processes, you can modify your product without interruption to provide better service to your customers. Innovation to respond to customers and partners has played an important role in overcoming McDonald’s recession over the years. In 1975, for example, a group of potential McDonald customers had a problem. At that time, soldiers in certain areas were not allowed to get out of their vehicles to relieve fatigue while resting. When McDonald realized this, he came up with an extraordinary solution; That is, adding a drive-thru section. McDonald’s first “machine restaurant” was set up near the Fort Havachoka military base in Sierra Vista, Arizona to serve soldiers, and machine restaurants were soon established in Georgia and Oklahoma City. In fact, McDonald’s product offerings, thanks to their smart and innovative partners, have been able to evolve over the years to the taste of their customers. Here are some examples of products that were introduced after being developed by McDonald’s branches: Happy Meal; Filet-O-Fish; Big Mac; Hot Apple Pie; Egg McMuffin; McFlurry; These innovations in the menu (along with the ones developed in the experimental kitchens) have allowed McDonald’s to offer its products for all meals and snacks, making it more profitable. But when introducing a new product, McDonald’s is very careful not to negatively affect the customer experience. As its former CEO James Skinner said in a 2010 interview with CBN: “McDonald’s does not put anything on the menu unless it is produced at McDonald’s pace.” Flexibility at McDonald But perhaps the biggest reason why McDonald’s has been so successful for so long is its ability to weather storms. Although McDonald’s trajectory has generally been upward throughout its life, the company has had to endure a number of major challenges. McDonald has had numerous cases that have been closed for a variety of reasons and have been the subject of a great deal of negative criticism. What is McDonald’s doing to address these issues? When viewed from the outside, it seems that at least part of their strategy requires acknowledging the problem or issue and then allocating internal resources to stay on top, as the following examples show: