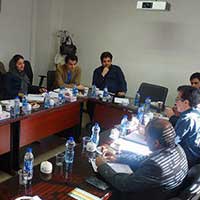 Pre-order news was the first topic that members addressed. In this regard, Khorramian mentioned some issues regarding the group of vote consultants and the holding of a seminar with German machine builders by this group and suggested that the organizations cooperate more in this regard.

Dr. Shervin Ahmadi, Director of the Polymer Research Institute, also stated in this regard: If the Association wishes to invite other countries, the Research Institute is ready to carry out communication and coordination work through international relations, and in addition, it has facilities at its disposal. Leave.

According to him, because the research institute is not interested in this and does not seek to join with foreign parties, this issue has a better effect.

The second part of this meeting was dedicated to reviewing the incoming and outgoing letters.

The discussion of the generalities of the recycling working group was considered as another agenda. In this regard, Dr. Ahmadi, while announcing the readiness of the growth center to carry out study work in this regard, said: “We will give study projects to students through associations.” We do research in the field of recycling.

The discussion on the above issue was postponed to the next meeting due to the absence of Alireza Mirblok.

Another issue that was examined was the investigation into the integration of inquiries by the Ministry of Industry, which Hassani, the secretary of the National Plastics Association, suggested that the letters be consolidated in the National Association and referred to specialized associations according to their expertise. In this regard, the proponents and opponents expressed their views.

In this regard, Koushki said: “In this regard, national issues should be left to the National Association for major decisions, and in my opinion regarding the integration of inquiries, it is better that other associations, according to their expertise, refer inquiries to them and Assign.

The issue of committees was another issue raised at this meeting. Accordingly, three committees include; The Plastic Industry Development and Promotion Committee, the Standards and Quality Committee and the Technical and Scientific Protection Committee were considered. Tasks were assigned and announced for each of these committees.

The review of the proposal to classify the five groups of inspection companies to the National Organization for Standardization and to determine the relevant requirements was considered as the last agenda of the commission.

The Polymer Research Institute also announced its readiness to cooperate in preparing the database of the Technical Commission.

Members present at this meeting; Davood Khademi (Aria Nam), Hamed Azizi (Head of Industry Relations Unit of the Research Institute), Dr. Shervin Ahmadi (Head of Polymer Growth Center), Shoaib Hassani (Secretary General of the National Association of Plastic Industries of Iran), Farzaneh Khormian (Secretary of the Association of Pipe and Fittings Manufacturers VC), Reza Abbasi (representative of the moldmaking community), Omid Koushki (representative of the Masterbatch and Compound Association), Kazem Zahiri (Chairman of the Board of the Masterbatch and Compound Association), Raha Farmanbar (representative of Rahchim) and Farzaneh Alirezaei (Secretary of the Commissions National Plastics Industry of Iran).