Have you ever bought a product from a reputable brand and realized after coming home that this product does not work properly? In such a situation, probably the first thing that immediately comes to your mind is to contact customer support services and raise the issue with them. But what if you could not get […] 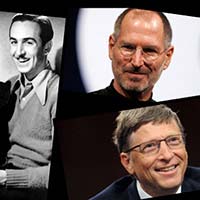 Have you ever bought a product from a reputable brand and realized after coming home that this product does not work properly? In such a situation, probably the first thing that immediately comes to your mind is to contact customer support services and raise the issue with them. But what if you could not get a convincing answer? Have you considered raising the issue directly with your CEO? This Zomit article is about 11 stories with a similar situation. Many people around the world are not satisfied with the product they want for any reason. After failing to resolve their issue through support services, they decided to speak directly with the CEO. And in disbelief, a few days later, they noticed that the CEO of a multimillion-dollar company like Steve Jobs had responded to their e-mail and solved their problem in person. 1. Steve Jobs, former CEO of Apple Several years ago, Aaron Booker bought a 15-inch MacBook Pro and a 22-inch monitor from Apple. At the time, Apple Services had announced that if someone buys two products at the same price, they can get a discount. But Booker realized that the discount did not apply to him. He wrote a short email to Steve Jobs explaining the problem to him and received a six-word response from him: “We will solve this problem.” Booker received a call the next day from an aide to Steve Jobs and his problem was addressed. “The problem is solved,” he wrote in another email to Steve Jobs. 2- Brian Moynihan, CEO of Bank Of America After forgetting to pay her credit card for two months in a row, Christine Brown found that she had been deducted 100 points. He found the e-mail address of the company’s CEO, Brian Moynihan, and wrote him a glorious e-mail. Two days later, the assistant CEO called him, and three days later, the points deducted from him were added to his credit card again. 3- Akio Toyota, CEO of Toyota Webbin Manzana observed that the dashboard of the 2008 Toyota Camry he had purchased had melted under the scorching sun of the Philippines. Although the car warranty had expired a long time ago, he wrote a letter to that effect and faxed it directly to Toyota CEO Akio Toyota. He said he received a call from the company the next day. Officials approached him, took his car away, and handed it to him with a new dashboard. 4. Mark Fields, CEO of Ford After buying a new 2015 Ford Mustang, Nahash Kulkarni realizes that its brakes are not working well. He delivered the car to the dealership. But after a month and parts of the car were replaced and repaired, he avoided taking it back. He wrote an email to Ford CEO Mark Fields explaining the problem. A few days later, he received a call from his office and his car was replaced with a new one. 5. John Com, CEO of WhatsApp One of the funniest complaints is about Nina Michani’s complaint against WhatsApp. He wrote a complaint directly to the CEO of the company, John Com, and asked him why WhatsApp does not have a sheep emoji! John Com answered him directly and wrote “I was surprised to hear this” and also showed him that WhatsApp has this emoji. 6. Tim Cook, the current CEO of Apple Mike Natkey, who works at East Texas Medical Center, said that some time ago his father bought a laptop from Apple, which unfortunately was not safe. His father contacted the company’s after-sales service; But he could not get a proper answer from them. After that, Mike emailed Tim Cook at 5:35 a.m. and discussed the matter with him. At 10:56 a.m. the next day, a lady from Tim Cook’s office called them and a new computer was sent to her father. 7- Target or Circuit City CEO Since this happened several years ago, the narrator of this story, Gil Silberman, is not sure about the name of the company. He said that some time ago, someone stole from him a checkbook related to the account he had closed and bought items with it. After the installments of the purchased goods were not paid, the officers went to Gil. He wrote a letter to all the employees of the company and explained the matter to them. They took care of his problem and no other officer came to him to take care of it. 8- Michael Dell, Founder and CEO of Dell Company A student named Tommy Tritz bought a computer from Dell online; But the desired product was not sent to him. He contacted the company’s support services; But every time he had another problem. Until he ran out of money and did not receive his computer. Tommy wrote a short, not-so-pleasant email to Michael Dell that night and received a prompt response from the executive team. Tommy’s money was returned to him, along with $ 156 spent on the Dell site to solve the problem. Tommy himself was surprised by the return of $ 156. 9- CEO of Travelers While calculating her monthly expenses, Maureen al-Maliki realized that she had been paying much more than usual for homeowners’ insurance for several years. He found that the money he paid was equivalent to the insurance money for much larger homes.