70 years of K – a success story made in Düsseldorf

What began as a small consumer fair with many everyday products such as nylon stockings has developed into the world’s leading trade fair for the entire plastics and rubber industry. This year, K celebrates its 70th anniversary 70 years of K not only means getting to know plastics in all its facets, but also meeting […] What began as a small consumer fair with many everyday products such as nylon stockings has developed into the world’s leading trade fair for the entire plastics and rubber industry. This year, K celebrates its 70th anniversary

70 years of K not only means getting to know plastics in all its facets, but also meeting many celebrities at the fair and discovering inventions that revolutionise the industry time and again. We proudly look back on 70 years full of ideas, innovations and surprises. Join us on a voyage of discovery through K’s past and be amazed at how long plastic has been with us in all its many forms.

In 1950, 2 million tonnes of plastic are produced worldwide. From this point onwards, plastics production develops rapidly. Without plastics, the post-war economic miracle would not have been possible. This is the birth of K in Düsseldorf.
You can discover everything that has happened in the K industry during these 70 years of success in our timeline

270 exhibitors from Germany are participating in K’52 from 11 to 19 October, occupying around 14,000 square metres of net exhibition space. 165,000 visitors come to Düsseldorf. The motto is: “Wunder der Kunststoffe” (english: “Miracles of plastics).

In the beginning, the trade fair is still purely a showcase where “John Doe” can marvel at the new plastic products, e.g. for the household.

The first K is opened by none other than the former German Federal President Theodor Heuss. This shapely sports car, whose body was made entirely of Vesto (polyester resin from Chemische Werke Hüls AG), wows visitors at the K 1963. It is the first series-produced plastic body for passenger cars in Germany 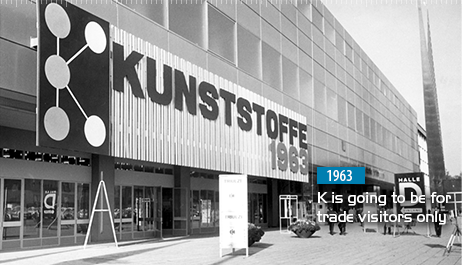 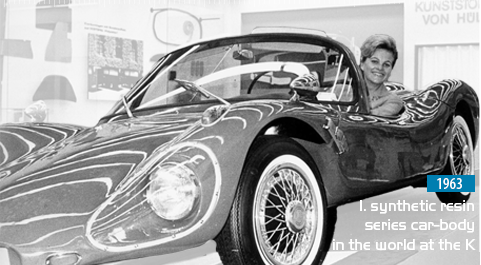 K takes place at the Stockum exhibition centre. When it opens in September, the Düsseldorf site is considered the most modern and pioneering trade fair venue in Europe. The new exhibition grounds now offer considerably more space than the old halls on Fischerstraße The former US Secretary of State Henry Kissinger opens K’79. Talks with the then Federal Minister of Economics Otto Graf Lambsdorff are of course not to be missed on this occasion

The K’83 has its exhibitors hurry over the desk to the fair in a sporty, casual manner. In addition, it thanks them with music in long-playing record format for ordering advertising materials 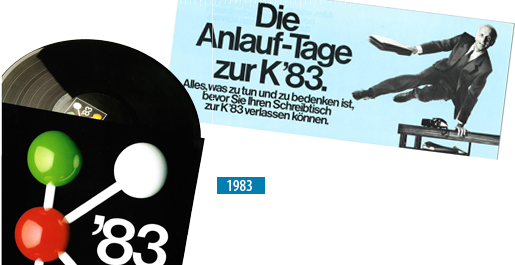 Sport and fun are not to be missed at K. Here is a sleek, super-light golf caddy at K’98

The special show at K 2001 has the motto “Plastics for outer space – problem solvers on earth” and is being realised by the European Space Agency (ESA), among others. Examples of successful technology transfer will be shown in the new exhibition hall 6

Indian delegations are regular visitors to K in Düsseldorf. India continues to be one of the fastest-growing countries in the plastics industry At the special show at K 2007, the performance spectrum of polymers is visualised by means of memorable demonstrations. The different areas of use and application are presented in a lively way by models

Former German Green Party politician Joschka Fischer speaks at the K and promotes sustainable thinking and action – also among representatives of the chemical and mechanical engineering industries. It is an appeal to the economic future.

As part of the special show “Plastics move”, the Swiss psychiatrist, scientist and adventurer Bertrand Piccard will be making a stop at K. He causes a sensation with the solar plane “Solar Impulse”, in which he crossed the USA without a drop of fuel – and proves what top performances plastic is capable of “Reflect. Rethink. Think laterally. Rethinking” are the buzzwords of K 2019. Never before has the industry so unanimously embraced the issues of environmental compatibility, resource conservation and waste avoidance. The Circular Economy is becoming the biggest field of action for the plastics and rubber industry

K in Düsseldorf celebrates its 70th anniversary! Today, as the world’s No. 1 trade fair for the plastics and rubber industry, it not only has its finger on the pulse of the times, but also sets the course for a responsible future in which plastics are an important part of the solution. Thus, the three guiding themes of K 2022 are Circular Economy, Climate Protection and Digitalisation 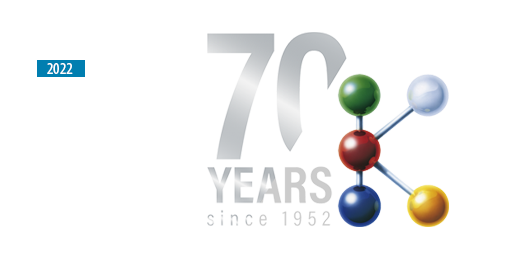